The Big Interview: No Guts No Glory

Do you dream some days of leaving the monotony of daily life, packing the essentials and heading off into the distant sunset? That’s was U.S. Travel and Landscape photographer Max Foster has done and Caroline Schmidt speaks to him about his new adventure.

For many people who dream of leaving the 'rat race’ and seeing the world, life is congested with daily routines and responsibilities that block those ambitions from happening. But Minnesota-based enthusiast landscape photographer Max Foster refused to let that be his fate.

“One night at dinner in February 2017, I asked my wife Amy out of the blue: 'What if we quit our job and travelled for a year?' She cried terrified at the thought of something so unconventional, albeit amazing. After the initial shock wore off, we kept discussing it and after a year of planning, she quit her job and we hit the road in our temperamental 28-foot Winnebago, Big Red, and The Beast - our heavy-duty truck,” recalls Max.

Having caught a perpetual travel bug photographing countries abroad and utilizing their two-to-four-week annual vacation to its limits, Max and Amy decided to take the plunge but to stay closer to home. Having been to Europe and other countries, they'd never explored the U.S., so intricately planned a 14-month photo road trip around America.

"2017 was a year of constant planning. What would we do about our job and income? What to bring, where to go and how were we going to enjoy the ride? I won't lie ... it was stressful, but worth it. Now, half-way through the road trip, we've decided to do whatever it take to keep going for as long as we can or to at least change our lifestyle so we can travel more," adds Max.

While Max is an enthusiast photographer by sunset, he is a CFO at a manufacturing company, which thankfully accepted his proposal to continue working part-time and remotely while on the road. As a result his day consists of 4am starts with a hike to his photo spot for sunrise, working and chores during the day, followed by shooting in the evening and boon-docking along the way.

For years, Max has had an aspiring interest in photography. Spending childhood days dreaming of seeing the places he'd read in National Geographic magazine and later photographing his travels. 'When I had my first trip to Italy, I took photo of everything and in my mind each one was going to be amazing! Upon arriving home, I discovered that the photo were blurry, noisy, lacking detail and otherwise lackluster.

"This was the catalyst; I never again wanted to invest time and energy into trips and come home sorely disappointed by my photographs. That was five years ago and since then I've dedicated countless hours to researching and learning photography." He's not done too badly either: In 2016, he received an Honorable Mention in the Landscape category of the International Photographer of the Year award and was one of the top 40 commended photographers at the Sony World Photography Awards 2017.

Max now finds himself travelling all the time with photography in mind. He used to spend every holiday and long weekend visiting a new country, with the purpose of exploring and finding new ways to photograph places both popular and off-the-beaten-track - and this road trip is no different. '' About 85% of this road trip is photography based, although we'd want to see these unique places regardless. We routed our trip to arrive at the best times for certain places, at least for the shots that l want. The Redwood forests in California, for instance, are best photographed in late May because you can get fog, light rays and Rhododendrons - it's beautiful.

"We've spent the last seven months heading down the south- east coast, then west, and we're currently in Oregon before moving on to Washington. We'll loop back to Minnesota in August as I'm running a workshop with landscape photographer Max Rive in Greenland, before heading back down the east coast to Maine for the world- renowned fall colors." Part of the trip's purpose is to scout locations for a new company, World Class Photography Tours, Max is launching with three other photographers, which makes his research all the more important.

"To scout a location, I use Google Earth, satellite imagery and topographical maps, then try to determine where the best angle is to be, for instance, if I want the sun to touch a mountain in a certain place. I'll calculate the golden hours and assess the weather, as climate conditions are a huge component.

Maybe I need a clear sky because I know the Milky Way will rise behind a particular mountain. I need to be sure it will be a new moon so the sky is dark, to know the best time to shoot at night and where the sun will rise. I can plot most of this on a computer to see how it can fit into our timeline, but as we're under no major time constraints, I have the luxury of staying put until I get what I'm after."

Whilst 14 months sounds like a long time, halfway through their trip, Max and Amy are struggling to narrow down the places they're going to visit, but their list of must - see places already had some firm favorites to recommend. "The Grand Canyon was absolutely breathtaking, so vast and unbelievable; we spent a week in Death Valley as it's the largest park outside of Alaska and so diverse. It's got everything from salt flats and sand dunes to mountains and abstract opportunities in mud cracks, as well as epic landscapes. It's hot; 112°F when we were there. The Pacific Northwest, where we are now, is also a favorite area.

Washington, Oregon, northern California are lush and green with a huge variety of landscapes. You've volcanoes going north to south, classic peaks, deserts and giant trees in the Olympic Peninsula - this region is a landscape photographer's paradise. We plan to spend about a month here, after that we'll head north into Washington and the Sawtooth mountain range in Idaho. It's a really remote area and hasn't been subject to a lot of landscape photography, but it should be as there are plenty of peaks and mountain lakes calling out to be photographed."

Other hotspots en route are Wyoming, Glacier National Park and the Canadian Rockies, where Max plans to meet another photographer to hike near one of its biggest peaks, Mt Columbia. They plan to shoot overlooking glacial lakes and the huge icebergs that come floating in, with dramatic mountain peaks behind. Wow! Makes the Lake District sound like a public park. He's doing all this before pack - rafting down the river to get out. Definitely beats a nine-to-five desk job!

As an enthusiast travel photographer, Max keeps his kit as light and as simple as possible. His main camera is a Nikon D810, with a Sony A6000 for point - and - shoot scouting of locations, paired with four lenses covering all the focal lengths he' d possibly need. A Tamron 15-30mm as an ultra- wide angle, Nikon 24-85mm as a mid- zoom, Nikon 70- 200mm f / 2.8 for a telephoto and the Tamron 150 - 600mm for those far­ reaching landscapes and wildlife. The prize of his kit bag, though, is his Really Right Stuff tripod, which he regularly sings its praises of for its reliability and durability. The list is finished with a Lee Filters circular polarizer, four- stop D and BigStopper, as well as the Fotodiox Wonderpana system.

Asked about signature techniques, Max gravitates to when shooting landscapes, he's vague and flexible preferring to choose whatever suits the light and location at the time. "Some photographers go with a shot in mind and once they have it, they go home; I pick the best approach once I reach the viewpoint and move around a lot, rarely staying in one location for long and if that means using unconventional approaches, such as hand holding, then that's what I'll do. I can't afford to waste a day, so am always on the lookout for hidden potential. I like using filters for longer exposures of water but it's all about working with the light. If l'm hoping for a golden sunset and don't get it, I'll look around for alternative shots. A few weeks ago, during a weak sunrise, I noticed backlit frost - covered trees over by a distant mountain - it was a lovely scene but was so far away it would be easily missed if you weren't looking for it. With the help of a telephoto, it became a great shot."

Nowadays with social media, travel bloggers and photographers are making a fortune from sponsorships as they travel and share their experiences. But success like that is time- consuming and few and far between, but it's not the only reason you should blog about an adventure.

Max and Amy launched their blog before they left not to earn money but to document their travels and for family to track their journey. "Each day is a whirlwind. We drive to a new spot, get up early to shoot then we'll work and go somewhere else. The blog is a good way for us to keep track, to let our friends and family know what we' re doing and where we are, and it's a good resource for anyone wanting to do a similar trip - things to do and not to do, for instance. There are a lot of big issues when pulling an RV we didn't know about, like finding places to park for the night, and so we put these details on the website for others to learn from when planning their own trip. After only three weeks on the road, we had learned a lot about living life in 200sq ft and have had several learning experiences.

"One of the biggest challenges from a trip like this is keeping to schedule, whilst getting the images and research that we want. If we decide to spend two weeks instead of one in a particular area enough times, it will push the back end of our schedule out. If we want to make it to Maine for fall colors in late October, say, we need to make sure we' re maintaining things fairly closely. That means I need to do lots of research on the road, which is tough if we have spotty internet connection or we're really busy, making it tough to turn up in the right place at the right time. With such a big rig to park, too, it takes a lot of forethought for where we need to be and making it there on time," say Max.

Whilst it may sound a little stressful and sometimes a rush, Max insists travelling with a camera has allowed him to slow down and appreciate his surroundings. Whether searching for a hidden waterfall or walking through a city park, he recounts how he often stops now to take it all in as opposed to rushing past. "Rather than using photography as a means to an end, I see it as a way to fully experience a place. With that mindset, I think it is possible to create compelling imagery that others can connect with. If my photos can remind someone of a fond memory or inspire them to visit a new place, my work has been successful.

"I really would encourage people to travel as much as they can and take the plunge if you've been thinking of a trip. You won't regret it. It will probably be one of the best decisions of your life. People should do what they want to more often, rather than do what they think is expected of them. Life is too short not to," concludes Max. 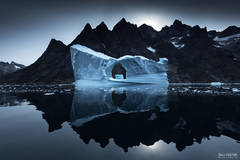 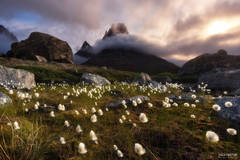 Behind The Shot: Arctic Breeze